Karina didn’t set out to free the Seelie Queen’s gallowglass. Now she’ll do anything to keep him.

After Karina and her brother, Chris’s, lives fall apart in separate yet equally spectacular ways, they leave New York behind and head to the UK. Karina buries herself in research for her doctoral thesis, all the while studiously not thinking about the man who broke her heart, while Chris—who’d been a best-selling author before his ex-fiancée sued him for plagiarism—drinks his way across the British Isles.

In Scotland, they visit the grave of Robert Kirk, a seventeenth- century minister who was kidnapped by fairies. No one is more shocked than Karina when a handsome man with a Scottish brogue appears, claiming to be the Robert Kirk of legend. What’s more, he says he spent the last few hundred years as the Gallowglass, the Seelie Queen’s personal assassin. When they’re attacked by demons, Karina understands how dearly the queen wants him back.

As Karina and Robert grow closer, Chris’s attempts to drown his sorrows lead him to a pub, and a woman called Sorcha. Chris is instantly smitten with her, so much so he spends days with Sorcha and lies to his sister about his whereabouts. When Chris comes home covered in fey kisses, Karina realizes that the Seelie Queen isn’t just after Robert.

Can Karina outsmart the Seelie Queen, or is Robert doomed to forever be the Gallowglass?

Add to your Goodreads TBR

When Karina and her brother Chris escape their problems in New York and visit Scotland, a leisurely visit to the legendary Robert Kirk’s grave site leads to a series of events that quickly spiral out of control…

Gallowglass, an urban fantasy by Author Jennifer Allis Provost, is full of mystery, suspense, danger, and fantasy romance. It’s the kind of story that pulls you in and holds your interest to the very last page, leaving you looking forward to the next book. The characters are likeable and complex, and the pace is steady–truly there is never a dull moment! I loved the sibling dynamic between Karina and Chris, the mythology of Robert Kirk and the faeries, the sweet and sexy romance between Karina and Robert, and the rich, detailed setting of Scotland. It’s a beautiful story and I highly recommend it.

Jennifer Allis Provost writes books about faeries, orcs and elves. Zombies too. She grew up in the wilds of Western Massachusetts and had read every book in the local library by age twelve. (It was a small library). An early love of mythology and folklore led to her epic fantasy series, The Chronicles of Parthalan, and her day job as a cubicle monkey helped shape her urban fantasy, Copper Girl. When she’s not writing about things that go bump in the night (and sometimes during the day) she’s working on her MFA in Creative Nonfiction

April L. Wood is an author of magical, YA mystery-romance, and a book blogger for A Well Read Woman Blog. When she is not glued to her computer or pressing her nose in a book, she is busy obsessing over her gardens to the point of insanity, feeding wildlife, and propagating her ever-growing collection of African violets. She lives in a beautiful historic Tudor-colonial with her rock star husband and their beloved black cat. View all posts by April L. Wood 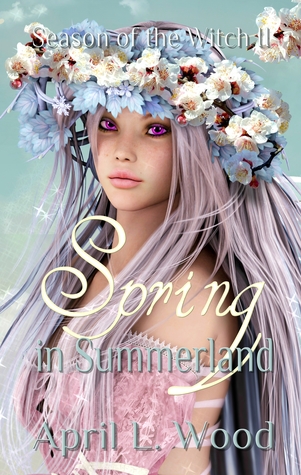 Fantasy lovers, are you looking for a magical weekend read? Do you like witches, curses, and magic? Download your Kindle Copy of Winter’s Curse, a YA Fantasy Romance for FREE! (8/10 – 8/14) Amazon USA  Amazon UK Teen ice witch Winter Rose-Thorne barely escapes witch hunters before finding herself in danger once again, after a […]